How the components of the Cloud fit together

In the Inside the Cloud Series, we looked at the individual components of the cloud in more detail. In this article, we will build on that and put all those components together and see how they combine to create a scalable, highly resilient self-healing Cloud.

A user connects to our DNS servers and is forwarded to either a CDN, a load balancer, or directly to a server.

If needed, the CDN will connect to the load balancer to obtain data it currently does not have in its cache.

The load balancer will forward the connection, as required, to the optimum server.

The server will be housed in a network zone. Each zone has it’s own subnet exclusively for its use. Zones can be connected to each other. Zones and subnets can be thought of as one and the same and their usage in documentation is interchangeable.

Each zone is secured by a firewall. All servers thus sit behind a firewall.

The architecture diagram below illustrates all the components, their connections and how they are used. 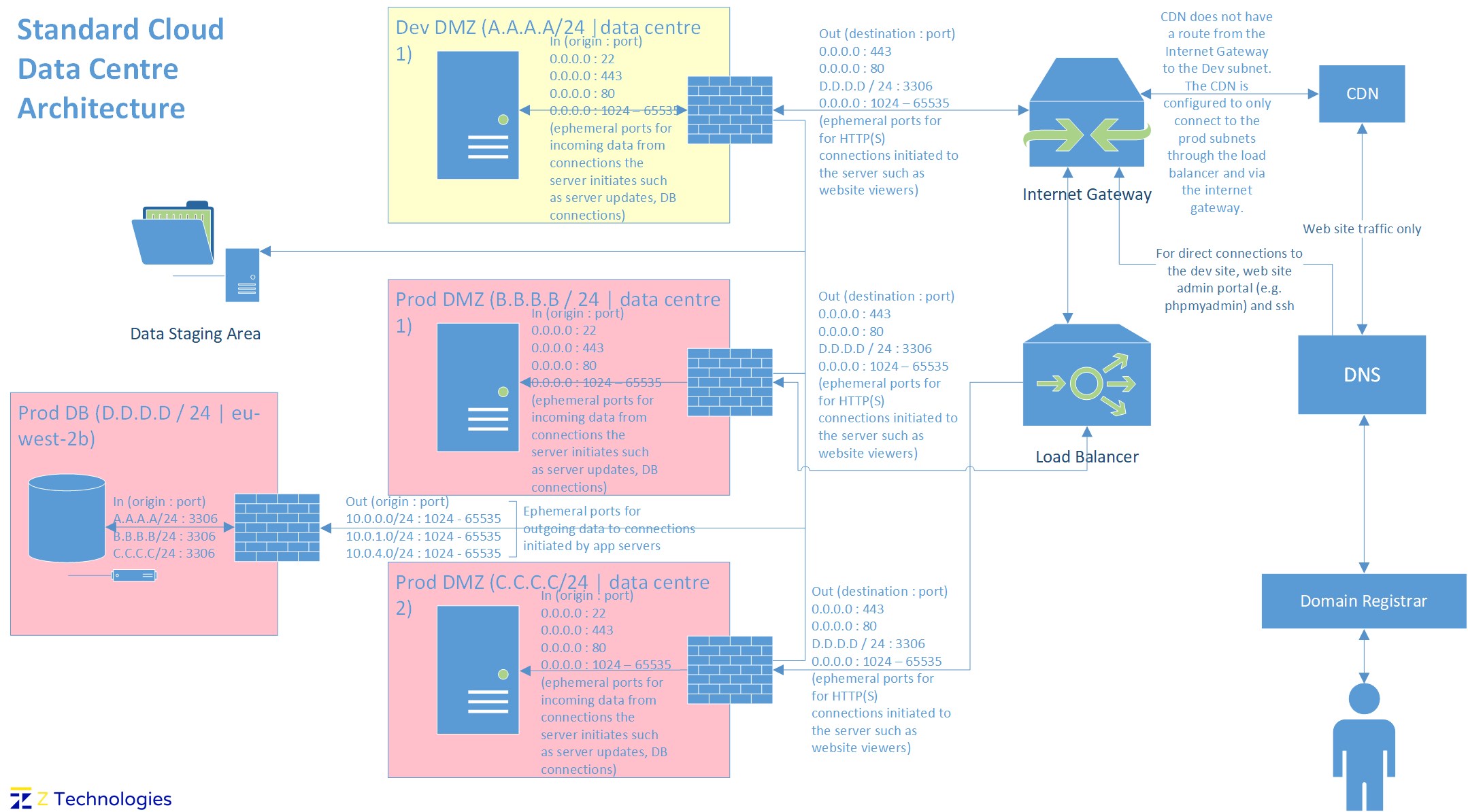 Connecting to a CDN or Server

A customer will first connect to the Cloud’s DNS servers, which will determine if the request is either for a specific server, or resolves to go directly to our load balancer, or should be passed to the CDN. This decision is based on the URL the user has entered and the data the DNS server holds in its’ DNS records table for that URL. The workflow below shows the path a request will take. Essentially, if the request can go to the CDN, then it will be passed to the appropriate CDN server. If the CDN has the data cached, it will respond back with the data. However, in the case that the data is not present on the CDN, then the CDN will have to connect to one of the application servers and obtain the data. In this situation, the CDN will connect to the load balancer which will then handle the request by forwarding the request to one of the servers in it’s server pool which will send the data back.

As we learnt in our article on load balancers, it is the load balancer that introduces the feature of self-healing and scaling in a cloud.

The way modern day solutions are designed is to have multiple servers, the same as each other, serving user requests. In this collection of servers, called a cluster, each server (called a node) can each take a user request and will process it in the same way as any other node in the cluster. For e.g. the same application, configured in the same way, can be installed on each node. The application on each cluster (i.e. each node within the cluster), can then connect to the same database (DB) cluster (i.e. the cluster connects to another cluster because the apps on the nodes connect to the same cluster). In this way entire solutions can be broken down into different components with multiple similar components each configured the same in order to have fault-tolerance and scalability.

Furthermore, in each modern day solution, the servers are built from a template (called an image) that is used to create the copies of the server. This means that each server is always configured the same as each other – can connect to the same databases, has the same applications, configurations etc. because they are all built from the same template.

It is also possible (although not shown in the workflow diagram above) for some cases, particularly within smaller organisations that either do not have a CDN or where IT admins work remotely and need to log into a server directly (perhaps a single bastion server or to work on a single internet facing app server), that the DNS will forward the user directly to the server, or the user will know the specific IP address and use that to connect to the server directly.

In our article on IP addresses, we learnt that zones are used to house servers of a similar type together, each zone has it’s own range of IP addresses, which means each zone has it’s own subnet (and it can be thought of as a zone = subnet), and for cyber security purposes each zone sits behind a firewall. Here, I’d also like to reinforce another very important cyber security concept – availability and redundancy

A highly available architecture means that there are multiple server (either multiple clusters and/or multiple servers in one cluster, but definitely multiple servers hosting the application) in multiple locations that a user request can be sent to or a user can be connected to. The benefit of this is that if one data centre housing the servers is down in any way (for e.g. a natural disaster), or a zone get’s compromised (for e.g. a virus, such as a ransomware attack), there will be servers and devices that are still available as they are physically located inside a different data centre in a different location and protected by being behind a firewall and on a different subnet.

Of course, some of these zones (in network-speak, subnets) are connected to each other, so there is always a risk of a virus infecting multiple zones, however, as the traffic between the subnets is regulated by a firewall, the risk is acceptable.

Of course, depending on the application solution design, we can always have more zones in the data centres if needed. Additionally, the load balancers and CDN is also made up of servers and will be housed in one or both of the data centres. We could also have more than one data centre if needed.

Another important cyber security concept is segregation. We should have different type of servers in different zones, so that the network and firewall of each zone can be configured differently. In our example, the solution does not require data base (DB) servers to be used directly by the users. They are used by the application servers that connect to the DB servers, with the users connecting to the application servers. Thus, we increase security by segregating the DB servers and having no direct connection to the an external network (like the internet).

In our example, looking at our architecture, we can see that the Prod DMZs face the outside world (they will be used to host websites and web applications and anything else that users from the internet can connect to). We also have a Prod DB zone that can host any DBs our application servers need (modern day websites and web applications for e.g. host some of their data on DBs such as product details) but are not directly internet facing (as users will connect to the application servers, which in turn will then connect to the DB as needed).

The firewall rules for each zone are subtly different, based on the servers within them and their purpose. In this way, the firewall allows some traffic, and denies other traffic, thereby securing the Cloud.

Table 1: A summary of the differences between the firewalls of each Zone

As you can see in Table 1 above, the DB Zone is the most restrictive (this would obviously be for the best especially, if for e.g. the DBs would contain sensitive data such as customer addresses). For e.g. it allows no traffic in except for data for it’s MySQL servers and that too only originating from the Prod and Dev DMZs. Further details on the Firewall rules in our example and the reasons for them is as follows.

With these components in place, and the network configured, data will flow from a user to a CDN to a load balancer to an application server to a DB and then back to the user (phew!!!). This has been a generic example to show what components make up a cloud and how those components fit together. The principles covered in this blog post are applicable to all types of Clouds and data centres.

If you would like to put these concepts to practical use, then please check out my turorial on how to build a web server.

Posted in Blogs, Cyber Security, Inside the Cloud and tagged build a web server.